The Prisoner of Heaven

The Prisoner of Heaven is the third book in Zafon’s cycle of stories set in Barcelona and featuring the Cemetery of Forgotten Books. It is much shorter than either of its predecessors yet lacks none of the intrigue of the earlier books. Nor is it missing their compelling characters.

We return again to Sempere’s Bookshop and renew acquaintance with Daniel Sempere, his father and their loveable helper, Fermin Romero de Torres, central characters in The Shadow of the Wind. And we meet again David Martin and Isabella, protagonists in The Angel’s Game.

‘High above him, Montjuic Castle rose among black clouds that swept across the sky and masked the moon. Without thinking twice, Fermin threw himself down the slope, falling and rolling through tree trunks, stones and brambles that hit him and tore his skin off in shreds.’ 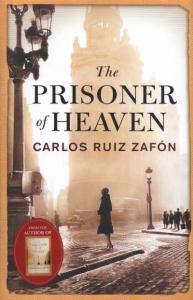 Two years after the events related in The Shadow of the Wind, Daniel Sempere is happily married with an infant son. It is Christmas. A stranger walks into his father’s bookshop and enquires after a special edition of The Count of Monte Cristo. He is willing to pay far more than the book is worth. When he leaves the book behind with a dedication for Daniel’s friend, Fermin, it sparks a mystery that has its roots in Barcelona’s revolutionary history. Fermin’s disquiet on being told of the stranger’s visit prompts Daniel to question him about his past.

The past is something the reader feels Fermin would rather forget. However, his problem can be simply stated: he loves Bernarda and wants to marry her; he needs papers to marry; he has none; Fermin Romero de Torres does not exist; he died in prison a quarter of a century ago!

Zafon now switches from first to third person point of view to relate the story of Fermin’s earlier life, a story at the heart of which is a sinister secret that will disturb Daniel’s newly-found happiness.

In 1940, Spain still suffers the effects of the civil war and its people are cruelly and mercilessly ruled by an oppressive regime. The authorities arrest Fermin and confine him in a cell Montjuic Castle, then Barcelona’s fascist prison. David Martin, the haunted narrator of The Angel’s Game, the second book in Zafon’s cycle, has already been confined there for several years when Fermin arrives. Prisoners in Montjuic routinely die of cold, starvation or disease. However, for his own reasons, Valls, the prison governor, is determined to keep Martin alive. The story reintroduces us to Isabella, who has always been Martin’s friend, and is making strenuous efforts to have him released from prison.

Like Monte Cristo, Fermin’s tale involves conspiracy, murder and a large fortune. And like Edmond Dantes, Fermin, with help from Martin and an apparent corpse, makes a dramatic escape. But unlike Dantes, Fermin does not find gold and jewels in an Aladdin’s cave. He goes on the run, possessed of the secret that, when told, will shatter Daniel’s perception of himself and his family’s past.

Again, as in his earlier novels, Zafon challenges our idea of the conventional hero. He paints Fermin as a brave but gentle man who values friendship and honour above fame and wealth. And once again, in Valls, he introduces us to a villain with no apparent redeeming qualities, one that demands a fourth novel to satisfy the reader’s sense of justice. What really happened to Isabella Sempere and will she be avenged?

‘My father stared as if he’d seen a ghost. I gulped, feeling a shiver run through my body. That girl was the spitting image of my mother; she had the same face that appeared in the set of photographs my father kept in his desk.’

Once again, the novel takes us into the secret library of the Cemetery of Forgotten Books, a fantasy yet, for me, one of the greatest fictional creations of all time.

Now that Zafon has given a resolution of the various plots in The Labyrinth of the Spirits, is it too much to expect that he will give us a fifth novel in the cycle? Even if you have read this latest book and not the others, I think it is worthwhile going back to the earlier works. They can be read in any order.