How do you end a successful run? At some stage, an author tires of her characters, runs out of steam or perhaps decides that it’s simply time to end it.

” ‘I can visualize him, developing this hobby of his …. And little by little developing a morbid taste for violence at second-hand. The violence for which he lacked physical stamina and for the lack of which he had been derided.’ “

Agatha Christie wrote her first Hercule Poirot story, The Mysterious Affair at Styles, during World War I. It was first published in 1920/21. I don’t think we are ever told how old Poirot is but a glance at his ‘biography’ will surely reveal that, at the time of the Styles affair, he is already a man of early middle age. We may therefore deduce – we are talking about detective stories here – that when Norma Restarick in Third Girl accuses him of being ‘too old’, he has undoubtedly reached and surpassed the great age of eighty years. 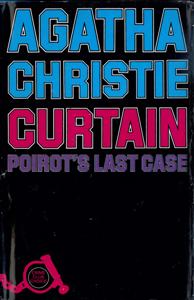 When her final novel, Curtain, was published in 1975, Agatha Christie herself was already eighty-five years old. Thus Poirot was somewhat older. His career ends as it began, at Styles, with a case involving his lifelong friend Hastings, who again narrates the story.  Curtain is close to being what we usually call today a psychological thriller. Christie has dabbled in criminal psychology before but here she makes mind games the central theme of the novel.

Yet, while Third Girl has a definite flavour of the sixties, Curtain seems to hark back again to an earlier age, which of course is impossible if the chronology of publication is to be followed. Styles has changed, but not that much.

‘He raised the rifle and fired, and as I saw – – There was a scream in a woman’s voice. It died in a kind of horrible gurgle.’

Of course, the solution to the chronology puzzle is much simpler than any of the complex problems that Poirot faced in his earlier career. Anticipating the end, Mrs Christie wrote Curtain thirty or more years before its publication date. The setting is genuine nineteen-forties, the language and attitudes appropriate to that era. We are to suppose that about twenty-five years have passed since the events narrated by Hastings in The Mysterious Affair at Styles.

The house has been purchased from the original owners by the Luttrells and turned into a guest house. Poirot has taken a room there and has invited Hastings to join him ‘to go on the hunt for a murderer.’ He is ill and infirm with arthritis, and relies on a wheelchair for getting about. However, his ‘little grey cells’ are as active as ever.

There is a murderer in the house and Poirot knows his identity. However, X is a person who never gets his/her hands dirty. He plays emotional mind games with his targets, the persons who will carry out the crimes, and derives his satisfaction from having arranged it all, and probably from seeing his targets ‘swing’ – if that indeed is to be the outcome.

Possible targets and victims are laid before us in typical Christie fashion: the Luttrells themselves; Dr and Mrs Franklin; Hastings’ own daughter Judith; Norton, a birdwatcher; Elizabeth Cole, whom we learn early on is related to one of X‘s previous targets; Boyd Carpenter, a wealthy retiree; Nurse Craven, who attends Mrs Franklin; and Allerton, a no-good womaniser. Take your pick!

‘I emptied out the tablets. Yes, they were almost exactly the same size as the aspirins. I put eight aspirins in the bottle, then filled up with the Slumberyls, leaving out eight of them.’

Hastings’ anger is aroused when he believes Judith is having an affair with Allerton and nearly commits murder himself. Then there is a death, and Poirot is forced to act.

Curtain is rather a sad story and far from being Agatha Christie’s best. However, it did inspire the following obituary in the New York Times:

Hercule Poirot, a Belgian detective who became internationally famous, has died in England. His age was unknown.

Mr Poirot achieved fame as a private investigator after he retired as a member of the Belgian police force in 1904. His career, as chronicled in the novels of Dame Agatha Christie, was one of the most illustrious in fiction.

At the end of his life, he was arthritic and had a bad heart …..

…. Dame Agatha reports … that he managed, in one final gesture, to perform one more act of cerebration that saved an innocent bystander from disaster………”

‘Tiens, mon cher ami,’ we can almost hear him say. ‘Do not weep for me. This is literature, not real life!’