Fast forward three decades from the colourful world of Death on the Nile! We’re now in the sixties, a time I remember quite well, the age of the Beatles, Beatniks, miniskirts and tight trousers, of long hair, Purple Hearts and angst. 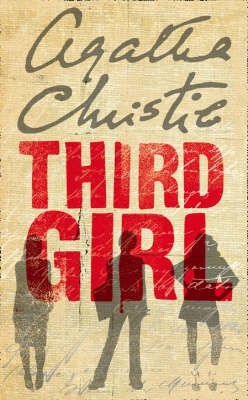 ” ‘Yes, I’ve killed him…. The blood got on my hands from the knife… I went into the bathroom to wash it off – but you can’t really wash things like that off, can you?’ “

Third Girl was published in 1966 and Mrs Christie vividly portrays the peculiarities of that decade, often with her tongue very firmly in her cheek, one suspects. Hercule Poirot is old. At least, Norma Restarick thinks he is when she visits him one morning at breakfast to confess to a murder, one she thinks she may have committed. With the assistance of his old friend, the crime writer Ariadne Oliver, the detective embarks on an investigation of Miss Restarick, her father, stepmother and flamboyant boyfriend. He doesn’t know exactly what he’s looking for, although he feels that somewhere there must be a pattern.

Norma is the ‘third girl’, occupying a London flat leased by Claudia Reece-Holland, who is secretary to Mr Restarick. The other tenant is Frances Carey, who works for an art gallery. Norma hates her stepmother; we know that. She probably hates her father too because he abandoned her as a five-year-old.

‘What were the salient facts of the case? Money was one of them, he thought… Somehow or other, money… He also thought, increasingly so, that there was evil.’

The problem for Poirot is: there is no evidence of any murder connected with the three, their friends or families. The nearest we get is a woman who commits suicide by throwing herself off the balcony of the flat above the one occupied by the girls. 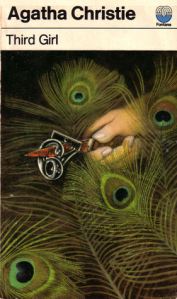 We do eventually get a murder, and it comes as a kind of relief (in a literary sense). Naturally, Norma is a suspect. Of course; in the opinion of many she is unhinged, mad, off her rocker, bonkers – or any other of the many expressions used (certainly in the sixties) for mentally ill. He father too apparently shares the common view.

But is it real? Could it be that Norma is a victim rather than a perpetrator? Third Girl is Christie at her most devious, dropping clues, building tension and then going off in an entirely new direction.

Oh, and I did enjoy her portrayal of the scatter-brained Mrs Oliver!