‘There were nearly twenty-five million inhabited planets in the Galaxy then, and not one but owed allegiance to the Empire … It was the last half-century in which that could be said.’

Isaac Asimov is one of my all-time favourite writers. Not only can he spin a great yarn but his sci-fi carries the stamp of authority and authenticity. He was a scientist himself, graduating from junior high school at the age of 12 and going on to do a master’s degree from Columbia in 1942 and a PhD in 1948.

Looking back at his early work from the 1940s and 50s, we can see he got a few things wrong, yet he was nevertheless (in a literary sense) an inventor, an innovator and a prophet.

In my little book, It’s a Fantasy World *, published at the beginning of this year, I had quite a lot to say about his Foundation, whilst not actually reviewing any of the books:

[The Foundations are] a comfortable vision for those of us living in the 21st century, not because the Foundation galaxy is some kind of cosmic paradise – it is anything but – rather that, with our wars, famines and plagues, it is remarkable that our species has managed to survive long enough to colonise one other planet, let alone millions.

Asimov’s contributions to fictional science were many; the laws of robotics, the hyperdrive, the positronic brain.  He wrote seven Foundation novels altogether, including the so-called Foundation Trilogy, which first appeared as short stories during the 1940s. Even without the other stories, the Trilogy is a masterpiece in its own right. In it, the author created psychohistory, which, as I wrote early in 2016 is a mathematical science which combines an understanding of the human mind with the laws of probability to predict events centuries in the future. Asimov’s galactic populations are large – quadrillions or quintillions – making such predictions feasible, especially as the direction of events is in the hands of Second Foundationers with mind controlling abilities. 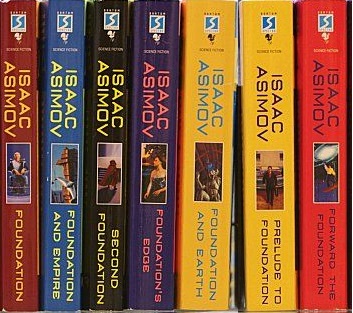 For the first three hundred years or so, the Foundation (the FIRST Foundation) is concerned mostly with establishing itself on the outer rim of the Galaxy. We see its struggles, its wars and its internal politics. We meet its heroes and contend with its villains, yet all are part of a greater plan – the Seldon Plan – that will ultimately lead to a new Galactic Empire. The First Foundation, according to its leaders, cannot lose.

‘Bayta, face frozen white, lifted her blaster and shot, with an echoing clap of noise. From the waist upwards [**] was not, and a ragged hole was in the wall behind. From numb fingers, Bayta’s blaster dropped to the floor.’

But it can! Along comes a new character, the Mule, an emotional telepath who can adjust minds to do his bidding – and believe in what they are doing. The First Foundation is defeated and the Galaxy is now dependent on the hidden Second Foundation to defeat the Mule and put the Seldon Plan back on its original course.

The First Foundation has laboured hard to find  the planet of these psychohistorians. All they have to go on is a remark by the great Seldon, recorded for posterity, that it lies at ‘the other end of the Galaxy, at Star’s End‘. But what precisely does that mean? The Second Foundation is prepared to sacrifice something of itself to prevent the First from finding out.

‘The first Speaker looked out silently as the window gained transparency. Past the giant structures to the quiet, crowding stars. A year would pass quickly. Would any of them, any of Seldon’s heritage, be alive at its end.’

We may criticise Asimov’s work on a number of counts. His characters are shallow; they move out of the picture just as we begin to find them interesting; he has almost completely missed the rise of the computer; he relies too much on verbal sparring between his characters, telling us what is happening through their words. What, we may ask, has happened to all his robots? Why aren’t there any aliens in his books?

Each of these deficiencies – if that’s what they are – can be countered. In the vast scope of five hundred years of history, individual human beings matter less than their deeds; Asimov gives us a nuclear age where miniaturised nucleic devices are every bit as enticing as our mobile/cell-phones and i-pads; dialogue is a strength, part of the very structure and style of Asimov’s writing. *** The absence of robots in the Foundation world is addressed in later books of the series, written in the years after 1980. As for aliens, had the author not died prematurely of an HIV infection contracted during surgery, we might have found out.

Isaac Asimov is one of the greats who has elevated sci-fi from its early days as a ‘pulp’ fiction to its rightful place as a true literary genre. The Foundation books are classics in their own right.

** to fill in the blank would be a spoiler.

*** read the brilliant trial of words between robot and roboticist in Robots and Empire and you will get an additional flavour of what I mean.

10 thoughts on “History of the Future”