‘I was fourteen when I killed my mother.’ 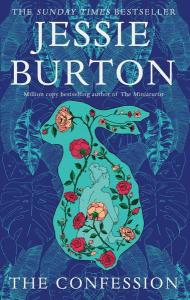 Elise Morceau is twenty years old in 1980 when she meets thirty-five-year-old novelist Constance Holden in London. They embark on a love affair. One of Constance’s novels is being made into a movie and Constance takes Elise with her to Hollywood to oversee the production. The world of wealthy socialites, movie stars and glitzy parties is new to Elise and at first she is dazzled by it all. However, the novelty begins to wear off. The affair with Connie is strained and she finds consolation in a new relationship with Matt and Shara, a young couple who are unable to have children together.

In 2017, when she is thirty-four, Rose Simmons hears the name Constance Holden for the first time. Connie hasn’t published  anything for more than thirty years but has begun working on a new novel. Now seventy, Connie is crippled with arthritis and needs help with typing and other chores about her house.

‘I would make up a name, I decided. A quiet, simple identity, that could easily be lost on the internet. Laura and Brown, a ubiquitous pair of bookends between which a real life could hide.’

Rose has already written her mother [Elise] out of her life. She works in a coffee shop and lives with her partner, Joe. Together, they are drifting along with nothing to show for their ten-year-long relationship. However, when she learns from her father that Constance Holden was the last person to see her mother alive, Rose determines to find out the truth about Elise’s disappearance. She invents  a new persona, Laura Brown, and applies for a job as a personal assistant to Connie.

Despite her fake resumé, Rose – or Laura – gets the job. The two become unlikely friends. But Constance shies away from questions about her past and Rose/Laura begins to doubt she will ever learn the truth. Moreover, always looming in her mind and threatening the friendship are the lies she spun about her own past.

In The Confession, Jessie Burton gives us two protagonists, mother and daughter, connected only through their relationship with a third. Constance is the enigma on which the stories of both depend. Rose tells her story in first person narrative. Elise’s is told in third person, the respective timelines alternating with one another as we move through the novel towards the final revelations. Both women are captivated  by Connie’s aura and the reader might suspect there are other similarities to be revealed about their respective life paths.

‘Elise began to be plagued by visions of catastrophe. Rose, her pram hit by a car. Rose, snatched at a traffic light as Elise rummaged in her bag. But indoors, the visions began too. Rose poisoned by a misplaced bottle of bleach ….’

The Confession is a novel about experiences and inner feelings to which, as a male reader, I am not, and never can be party. Several times, I found myself floundering among the complexities of female/female relationships and confused by the different kinds of ‘love’ between the characters. It is curious too, how the author depicts Elise as the younger of the mother-daughter pair and Rose as the elder at the time of narration. I felt that this contradiction should have some deep meaning but was able to see it.

The Confession is a literary novel, by a woman about women, quite different from Jessie Burton’s first book, The Miniaturist, which I have read twice and enjoyed immensely. Though appreciative of the quality of writing in this new work, I cannot really say I enjoyed it. Though intrigued, I was never totally absorbed.