First published in 1990, this novel was judged by the author himself to be a flop. Now that Ian Rankin has made his name, principally as a writer of classic detective stories, he has judged it suitable for reissue (or his publishers have).

Westwind is essentially a what-if spy story. Although the world it depicts is imagined, there are parts of the book where the reader is reminded of present day events and situations which are real.

‘The tarmac below was churning lie the sea, as unsteady as a fairground ride. Adam’s hands were still there. Blood pounded in Dreyfuss’ ears, tortured metal, the whine of the uncontrollable engines. Total malfunction. Absolute and total …..’ 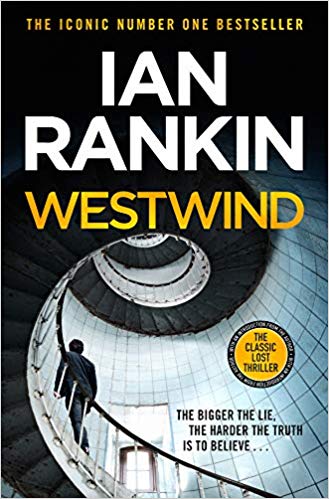 Martin Hepton monitors satellite images from a ground station in England. When the system malfunctions, the operators put it down to a glitsch, all except Paul Vincent. However, before Vincent can tell Hepton what he saw, he is suddenly and mysteriously on sick leave. At the same moment, an American shuttle crashes, killing all on board except Major Mike Dreyfuss, the sole British member of the crew. Dreyfuss is taken to Sacramento hospital where he is isolated from his friends and subjected to interrogation by a USA general and members of the secret service.

‘The opaque eyes seemed to clear, the mouth trying to form words, But the voice box was shattered, the windpipe raw …. then the breath seemed to rattle within, the eyes became filmy, and Hepton could only crouch there, staring at his friend.’

The United States is meantime pulling out of Europe. Britain and the US no longer have a ‘special relationship’, whatever that means, and relations between the two countries are strained. Hepton and Dreyfuss find themselves on the wrong side of a very secret war, in which neither can tell who or what the sides are. After finally meeting up in England, they and their journalist friend Jilly Watson are pursued by some very nasty people with guns who are desperate to prevent them discovering what is going on and why the shuttle crashed.

Perhaps not Ian Rankin’s best literary standard, nevertheless an edge-of-the-seat thriller with a very plausible plot. The ‘heroes’ here are more James Bond, less John Rebus, while most of the villains wear suits or uniforms. Look out for the trigger-happy Harry, who wears neither!