Genesis of the Piano

(Cristofori, Maffei and others) 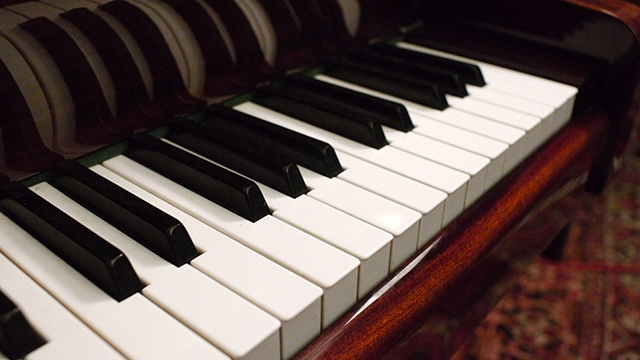 Credit for inventing the piano belongs to an Italian, Bartolomeo Cristofori, who was born in Padua in 1655. Little is known of his early life but he must have trained as a craftsman and technician. By the beginning of the 1690s, he had earned sufficient reputation as an instrument builder to attract the attention of Prince Ferdinand of Medici. The Prince, a competent harpsichordist, had a valuable collection of keyboard instruments, and he engaged Cristofori as their custodian.

Cristofori moved to Florence where he continued to practise his trade. When the eighteenth century dawned, he was not only making harpsichords for the Prince but incorporating in them new ideas of his own. He began experimenting with hammers instead of quills, which allowed the strings to be struck with variable force to produce the gradations of volume that are characteristics of the modern pianoforte.

Over the next ten years or so, Cristofori built several of these innovative instruments. None of these early examples still exists and it is likely the variation in volume of which they were capable was modest. They had wooden frames and the string tensions were in keeping with the acoustic needs of the harpsichord. After all, Cristofori’s interest was the harpsichord and it is indeed probable he did not think of his designs as a new invention at all. In some ways, the instruments he designed and made were not even original. Instruments based on striking rather than plucking the strings, such as the clavichord, already existed, indeed had existed for two or three hundred years. However, whereas the clavichord at its loudest can never produce much more than a mezzopiano sound, whilst its quietest is a subdued pianissimo, the Paduan’s invention was a least capable of  sounds which could be said to approach ‘loudness’. It was for this reason that Cristofori described his instruments as gravicembali col piano e forte, that is, harpsichords which produce both soft and loud sounds.

Cristofori continued working on his new ideas and improving on the mechanism of his invention until, by 1726, he had constructed instruments that incorporated the main essentials of the piano we know today.  The Paduan, it is clear, was conversant with the principles involved in creating an instrument like the piano, one where the strings were struck by hammers, and with the problem of  making the hammers rebound after striking. Without this property, they don’t dampen the vibrations they have created. To obviate the problem, Cristofori devised the mechanism called the escapement, an important feature of pianos to this day. His pianos had  three features: free-moving, leather covered hammers, set to rebound immediately after striking the strings; a check to catch and hold the falling hammer; and a damper mechanism to still the strings’ vibration and produce a clean tone. Sadly, most if not all of thee earliest efforts are lost.

If Cristofori had been a scientist in the mould of Newton or Einstein, he would probably have published a paper on his work, but he was not. Indeed it is likely he did not regard his work as original at all. For that reason, his invention languished and did not burst out into the musical world in a fanfare of trumpets.

The piano did not take off in the country of its birth, at least not through Cristofori’s work or achievements. Italy, the land of opera, of harpsichords and of fine keyboard players was in the main either unaware of Cristofori’s idea or ignored it. It is indeed odd that Italy has produced few pianists of world fame and no great composers of piano music. Often, new ideas reach the world through luck or coincidence and that was indeed the case here. The piano came to prominence through the intervention of quite another Italian. He was Francisco Scipione, the Marchese of Maffei.

Maffei was from a very old Italian family. He was born in Verona in 1675 and studied theology at the Jesuit colleges of Parma and Rome. He was not a musician but became in the course of his life a poet, dramatist, archaeologist and failed man of business.  In 1709 he went to Padua with the intention of establishing and publishing a periodical, the Giornale dei Litterati d’Italia, to promote his novel ideas on Italian drama, with his partner, the Venetian Apostolo Zeno.

He must have visited Florence too because, whether by accident or through having contacts in high places, he either met Cristofori himself or came across examples of his work.  He published in his Giornale, complete with detailed diagrams, an article on the Paduan’s invention. Though the journal project was not a great success and the operation soon folded soon, the article reached Germany in translation.

Gottfried Silbermann, a master builder of organs and harpsichords had also been experimenting with hammers but without much success. However, around 1722, he was attracted by a translation of Maffei’s article that appeared in a German journal. He began to construct pianos using the description contained therein without, apparently, having seen any of the actual instruments. After several years of experimentation – by which time he possibly had a chance to inspect a Cristofori piano – he was able to manufacture a piano to satisfy the demands of both Johann Sebastian Bach and Frederick the Great, Emperor of Prussia. Silbermann even made some improvements of his own, such as the introduction of a hand operated controls to raise the dampers and move the keyboard sideways, like pedal functions on a modern piano. By 1747 he had improved his pianos sufficiently to attract the praise of the two great musicians and to generate some sales.

Already, other German companies were manufacturing new machines, to a greater or lesser degree according to the Cristofori model. Both Germany and Austria now had piano industries. However, German piano building had not followed the path charted by Silbermann. Instead of concentrating on Cristofori’s idea of making a harpsichord with dynamic variances, they were working on other instruments like a more powerful version of the clavichord. These new instruments were called ‘square’ pianos. The type of action they used was given the name Prellmechanik (rebounding action). In the German action, the hammers pointed toward, rather than away from, the player, and, instead of being hinged to a rail passing over all the keys, they were attached individually to their respective keys. As the front of the key is depressed, the back rises, carrying the hammer with it.

German development reached a peak in the work of Andreas Stein of Augsburg, originally an organ-builder like Silbermann. By 1777, Stein  had improved the mechanism sufficiently to satisfy Mozart, who visited him that year and played on both his organ and his piano. The composer had used other pianos by then and often complained about their hammers and the muffling of the sound. 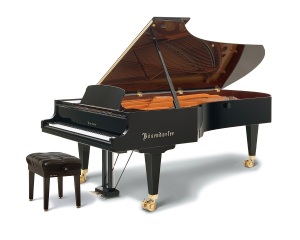 By 1800, the new industry was centred on Vienna, where Andreas Stein’s children had moved the business. Another piano maker of note in the city was Hofmann. Other manufacturers at the time were Schiedmayer of Stuttgart and Lemme of Brunswick. It had taken nearly a century for the piano to be accepted as a realistic alternative to the harpsichord. The piano had also reached London.  The first model is thought to have been built by an English monk, Father Wood, for an Englishman called Samuel Crisp. However, the first recognised piano builder was Johannes Zumpe, an émigré from Saxony, who began manufacturing in the 1760’s. Zumpe’s pianos were square and over the next few years found many imitators, in England and in France, like Broadwood and Erard.

JS Bach’s son Johann Christian made an important contribution to the piano’s success in Britain when, in June 1768, he performed the first solo piano pieces to be heard at a concert. He was appointed official piano tutor to Queen Charlotte.