The Seven Deaths of Evelyn Hardcastle

‘As with Bell, my skin prickles when I see Ravencourt in the mirror. Some part of me remembers my real face and is perplexed by this stranger staring back.’ 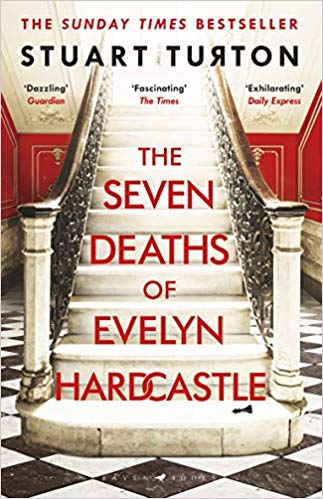 This novel was a ‘left-over’ from my recent holiday. Having been warned that it was a ‘strange’, ‘confused’ and generally difficult read, I decided to leave it until I returned home. The fact that it won a Costa first novel award did not automatically recommend it to me. Having read and studied a few Costa short story winners in the past, ‘strange’ and ‘confused’ are a couple of adjectives that readily sprang to mind.

Well, you know what? Despite its strangeness and confusion, I actually enjoyed The Seven Deaths of Evelyn Hardcastle a lot. Superficially, it has a very Agatha Christie feel:  a house party gathered in an old mansion; a lord and lady; their sons and daughters; a bastard or two (in both senses of the word); maids, footmen, sundry socialites; a detective – oh, and a murder! And there all similarity with the works of the Queen of Crime ends. This is a detective story like no other.

The murder of a child some nineteen years ago links the characters to a mysterious death in the present. The main protagonist, whose name we do not learn until well into the story (except by reading the blurb), must solve the mystery of Evelyn Hardcastle’s death within eight days in order to escape from Blackheath. The twist is that each of those eight days is the SAME day, at the end of which – or at the end of seven of them anyway – at 11pm, Evelyn dies.

Confused? So was I. The hero, Aidan Bishop (let’s name him; it makes things easier), will wake up every morning in the body of a different host. There’s a drug dealer, an artist, a gambler, a peer of the realm and sundry others, all members of the Blackheath staff or guests at Peter Hardcastle’s party. Aidan must gather clues which will enable him to relive the day differently next time round. Unfortunately, his real memories are embedded in the personality of the host, which means recollecting and assembling facts is very tricky indeed. Added to that, Aidan isn’t the only character playing this game and he has no idea who the others are. And, in the end, only one player can escape from the Blackheath purgatory.

‘ “You don’t need to be afraid,” says the creature, taking a half-step out of the gloom. It’s not a bird at all. It’s a man dressed as a medieval plague doctor, his feathers a black greatcoat, the beak belonging to a porcelain mask, glinting in the light of a nearby lamp.’

Running the game is the Plague Doctor, apparently a non-participant, who emerges once in a while from the shadows to acquaint Aidan with the ‘rules’, to issue warning and – maybe – give him tiny clues. Also in the shadows is the mysterious footman, a psychotic, knife-wielding maniac, whose objective appears to be to stop Aidan solving the mystery in whichever of the eight hosts he happens to reside.

‘I manage to nod as he looms over me, his stench wrapping around me when he sinks the blade into the familiar spot beneath my ribs, blood filling my throat and mouth.’

Helping Aidan is Anna, a woman whose name appears in the first chapter and whom he instinctively wishes to save. She seems to be part of his real past though he has no memory of who she is or why she is important. Can he truly trust her, or is Anna merely another participant in the game?

As Evelyn keeps on dying and the other bodies pile up, to be supernaturally resurrected at the beginning of the new day, Aidan comes closer to a solution. However, he only has eight lives and is rapidly running out of hosts.

The Seven Deaths of Evelyn Hardcastle has a clever but devilishly complicated plot, causing some readers I know to give up on the book. It must have been a nightmare to write. It was certainly a difficult read, not because the writing is bad – it isn’t! – but because of its fantastical premise. How can we reconcile our everyday experiences with the idea of reliving them as someone else?

Reminiscent of the movie Groundhog Day and the Star Trek episode Cause and Effect, Seven Deaths is a mind-bending read. Yet, with all its confusion, I couldn’t put it down until the end.