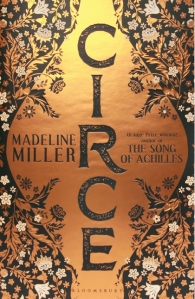 Madeline Miller earned the Orange Prize in 2012 for her highly original novel The Song of Achilles. Now, six years later, she is back among the gods, goddesses and sundry immortals with another feast of ambrosia and a look at one of the lesser villains of Greek mythology.

I say ‘villains’ because, to Homer and Odysseus, and presumably the other Greek heroes, Circe was just that – a villain. After all, she turned Odysseus’ men into swine, didn’t she?

However, in Circe, her latest novel, Miller encourages us to see Homer’s witch with fresh eyes. Circe is an ugly duckling kind of story, one where the emerging swan is perhaps less the graceful beauty than the wisdom through experience type.

‘I stepped into those woods and my life began.’

The daughter of the Titan Helios, the Sun God, and Perse – a nymph, Circe is widely despised among the immortals for her unimpressive looks, weak voice, foolishness and lack of godly powers. She is larely ignored by her father, who is too busy begetting and being godlike. Then she discovers natural magic – Pharmakeia – witchcraft.

She transforms the mortal fisherman Glaucos into a godlike creature hoping to win his love. But when he falls in love with the beautiful Scylla instead, she transforms Scylla into a monster. Her crime isn’t so much that she has done it – her three siblings are witches too – but that she confesses and boasts of her prowess in public.

Banished to a solitary island, Circe works on her plant skills. She has a lioness, wolves and sheep for company and is visited occasionally by Hermes. He becomes her lover and foretells the arrival of Odysseus. Summoned by her sister Pasiphae to Crete, she oversees the birth of the Minotaur and devises a means of keeping his horrendous appetites in check.

‘At last I saw it clear: the nose broad and flat, shining wetly with birth fluid. The shaggy, thick face crowned with two sharp horns. Below, the froggy baby body bucked with unnatural strength. Its eyes were black and fixed on mine.’

Circe is a clever reconstruction of several mythic stories told by the Greek poets. All the familiar heroes and victims are here – Prometheus, Medea, Ariadne, Theseus, Jason and the Fleece, even Zeus and his thunderbolts. Here, the gods are whimsical, spiteful and vengeful, yet their devilish deeds, the bloodshed, the awful punishments are treated equally with cruel intent and lighthearted abandon. The mortals are fearful and short-lived. The dust passes over their graves like the immortal winds of Circe’s forest paradise. She masters her craft; she brews her spells while the ages pass.

Up to this point, Circe is episodic in style and doesn’t have much of a plot but, I tell myself, a great story doesn’t need one. Its prose is delicious and you just want to keep reading. Miller gives her characters personalities; they are no longer the same clunky types who inhabit the legends themselves.

‘We walked on the sun-warm sand and swam in the bright bay ….. I unrolled all Aiaia’s wonders like a rug before him, and I saw him begin to waver.’

At last, Odysseus turns up at the island and by now we know Circe’s nature and empathise (while not necessarily sympathising) with her motives and designs. We feel the cruelty of her condition and at times the abject loneliness of her exile. We want her to hit back.

Whilst there are surprises in Circe’s relationship with Odysseus we do not have to be surprised at the turn of events. Yet even the expected turns out to be surprising when Circe at last grows a backbone. And when is a woman at her most dangerous?

I don’t want to spoil the surprises. Suffice to say, this story goes far beyond the one told in The Odyssey. And even if you are familiar with the lesser myths surrounding Penelope, Telemachus and the rest, you may still enjoy the twists and turns Madeline Miller introduces in her ending. With nothing but the loneliness and emptiness of immortality ahead, perhaps it’s time for Circe to confront her unrelenting father and risk Zeus’ thunderbolt in one last gamble.

‘Her body sagged out of the mist. I had never seen it before, gelatinous and huge. Her heads squealed and bucked, as if trying to haul it back again. I could see now the beginnings of her legs, those twelve monstrous tentacles stretching away from her body into the mist.’

Circe isn’t the epic poetry of Homer. It isn’t Homer at all, but it’s fun. Like all myth, it holds eternal truths about the human condition. The novel is an entertaining romp through the classics, frivolous maybe but also dark and deadly. It is a novel to be enjoyed by anyone who loves the myths of ancient Greece, or has a yen for the literature of the mid 20th century and remembers the ‘historical’ fiction of Mary Renault and Robert Graves.

2 thoughts on “Nymphs and Naiads”