A Column of Fire

‘The fire continued to burn, and the dead body of Philibert turned into a blackened ruin …… I did not know how men could do such things, and I did not understand why God would let them.’

It’s nearly twenty years since Ken Follett surprised many of his fans with an historical saga about the building of the fictional Kingsbridge Cathedral. Despite many alleged historical inaccuracies, The Pillars of the Earth, published in 1989, quickly became a best-seller. World Without End, a sequel set a century and a half later, followed in 2007. Both novels have been turned into TV films. 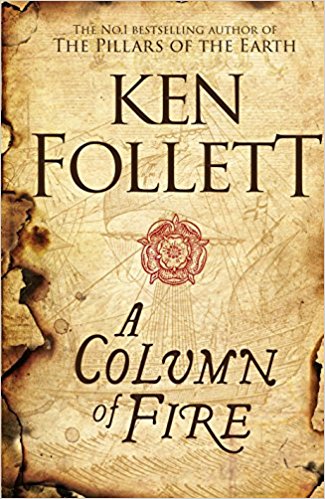 Now, Ken Follett has returned to Kingsbridge for the third time, to take up its fictional story once more. A Column of Fire is set in the sixteenth and early seventeenth centuries, from the last days of Queen Mary Tudor to the Gunpowder Plot of 1605 and its aftermath. Like the earlier novels, the story occupies a huge canvas of time and space, plot and character. It moves, not always seamlessly from England to Scotland, France, Spain, the Netherlands and even the West Indies.

The main protagonist is Ned Willard, at the start of the novel a young man with Protestant leanings who is in love with Margery Fitzgerald, the daughter of a staunch Catholic family.  Married against her will to Bart, the Earl of Shiring, Margery finds herself in a loveless relationship, complicated by the attentions of her husband’s lecherous father. His hoped dashed, Will takes service with William Cecil, secretary to the princess Elizabeth.

‘Pièrre had no intention of marrying Sylvie, of course. A protestant wife would end his career with the Guise family. Besides, he did not even like her …..’

Meantime in Paris, Sylvie Palot, the daughter of a bookseller and -printer, is supplying French bibles to Protestants. She is deceived into marrying the ultra-Catholic spy Pièrre Aumande, who betrays the Palots to the authorities.

‘Pièrre guessed they were raping the wife before killing her. He had observed ….. that when men started to kill they always raped as well. Lifting one prohibition seemed to lift them all.’

In Seville, Barney Willard, Ned’s brother, is living with their cousin Carlos and his family. Carlos’s African slave Ebrima is suspected of being a Muslim. When the three men are assaulted by thugs hired by a rival and Carlos’s business as an iron-maker wrecked, they leave Spain for the high seas.

These are only a few of the many characters introduced in the early chapters of A Column of Fire. Others include Mary Stuart (later Mary Queen of Scots), Elizabeth Tudor (later Queen Elizabeth I), Francis Walsingham, and the King and Queen (Caterina de Medici) of France. How their lives intertwine with the author’s inventions occupy the remainder of this 765-page novel.

Both Ned and Margery, Sylvie and Carlos, despite their beliefs are moderate, peace-loving people – as indeed are many of the other actors in this drama. However, all are caught up midst the hatred and bloodshed of the age. Ned finds himself working with Cecil to deny freedom to the Queen of Scots; Margery is assisting the Catholic Church in bringing priests to England; Dowager Queen Caterina is doing her best to keep the peace between the Catholic and Protestant families of France.

The plot of A Column of Fire is much too complex to detail in a short review. Moreover, to do it justice in summary would be to give away much that is enjoyable about the story and would spoil the suspense. The characters, the fictional at any rate, move through the pages and the years giving us few clues as to what their destinies might be.

The half century covered by this novel may well be the most popular of all in works of fiction: the aftermath of the Reformation; the torture and burning of men and women deemed to be heretics; the Spanish Inquisition; the Armada; the St Bartholomew’s Day Massacre; the imprisonment and execution of Mary, Queen of Scots; Guy Fawkes and the Gunpowder Plot. These and many more historical events are portrayed in this remarkable saga of the Elizabethan Age.

‘Mary’s head fell onto the stage, and the executioner was left holding her curly auburn wig. The head on the floor was revealed to be covered with short, grey hair.’

Many authors have tackled it in greater detail, focusing on one episode rather than on many. Some may even have (arguably) done it better, for example, Dumas in La Reine Margot, Jean Plaidy in The Royal Road to Fotheringhay and others, or even AEW Mason in Fire Over England. However, few writers outside of non-fiction are brave enough to tackle the era on such a grand scale. Follett has the skill not only to bring the times alive but to with populate them with  invented characters whom we can almost believe did actually live. At the same time, he does not pull punches nor shy away from scenes that turn the stomach.

It may be that he shows a slight (natural?) bias towards an English point of view – as opposed to a French, Scottish or Spanish one – yet he manages to give near equal weight to the opposing religious doctrines, exposing the sometime sincerity as well as the hypocrisy of both. We may not always agree with his viewpoint. Indeed, once or twice I found myself at odds with his interpretation of events. Yet, whatever the weaknesses of plotting, or the historical ‘glitches’, there is no denying that A Column of Fire is a great story.

‘The fireships approached the screen of small vessels that Medina Sidonia had deployed to hamper them. The smoke that filled Rollo’s nostrils smelled of wood and tar. He could feel the heat of the flames.’

2 thoughts on “Return to Kingsbridge”