[Pareidolia: – defined as the mind’s ability to form images of things that aren’t really there]

The Nature of the Beast

For a mainstream scientist, especially one as distinguished as the geneticist Bryan Sykes, to apply his knowledge and talents to a fringe study is unusual to say the least. But that is precisely what Professor Sykes has done in The Nature of the Beast. In this book, he examines the evidence for the phenomenon called variously Yeti, Almasty, Bigfoot, Sasquatch and the Abominable Snowman. 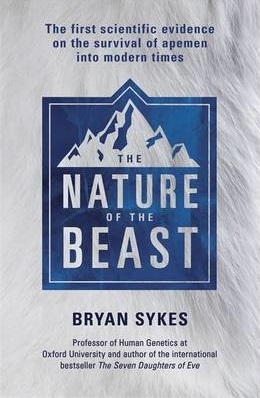 Let me make my position clear. I regard such ‘creatures’ pretty much in the same way as I do the Loch Ness Monster, vampires and werewolves. That is not to say that all the people who claim to see, hear or smell something are deluded. Over the decades, many otherwise well-educated, sane and honest individuals have reported sightings, have discovered footprints, or have experienced feelings of being watched. Many have indeed made it their lifetime work to study the evidence and discover exactly what IS out there, if anything. Sykes calls them cryptozoologists, and he talks about them a lot in The Nature of the Beast.

Readers familiar with his books (like, for example, The Seven Daughters of Eve) will recognize Sykes’s style here. He gives us chapters on the science, always well explained, and a bit of history interspersed with personal anecdote. Beginning with his own experience in the mountains not far from Seattle, he takes us through the ‘evidence’: mysterious sounds from under a tree; equally mysterious footprints discovered by mountaineers in the Himalayas; accounts of ‘encounters’ with families of Neanderthals, or Neanderthal/Human hybrids.

Bryan Sykes would, by his own admission, love to find a surviving Neanderthal or a new species of human. For, though the last Neanderthal is believed to have died more than 30,000 years ago, when Sapiens was already spreading across the planet, he does point out that between 2% and 4% of the nuclear genome of modern Europeans and Asians has Neanderthal origin. However, on the basis  of earlier ‘proper’ studies, it seems unlikely that he will. His own project, the details of which occupy half of The Nature of the Beast, involved collecting hairs found at Bigfoot etc ‘sites’, preserving them and submitting them to Mitochondrial DNA analysis. *

The results of the study, many of them predictably negative (and indeed, often amusingly so) as regards establishing the yeti as a de facto new species, did however throw up a few surprises.

Despite much of the genetic science being repetitive  — it has already been covered extensively in Blood of the Isles and other works – I found The Nature of the Beast an entertaining read. It was a bonus to discover just how unreliable the human brain can be when attempting to identify phenomena by sight or sound.

Although Pareidolia is alive and well in the twenty-first century, there is clearly much to be learned about the possibilities .

‘There are more things in heaven and earth , Horatio, than are dreamt of in our philosophy.’ (Shakespeare, Hamlet)