I’m pleased to welcome to by blog M.M. Holaday, author of The Open Road, to be published this week by Five Star, a division of Cengage Learning. M.M.Holaday (Nan to her friends) is a former reference and rare book librarian, and The Open Road is her debut work of fiction. 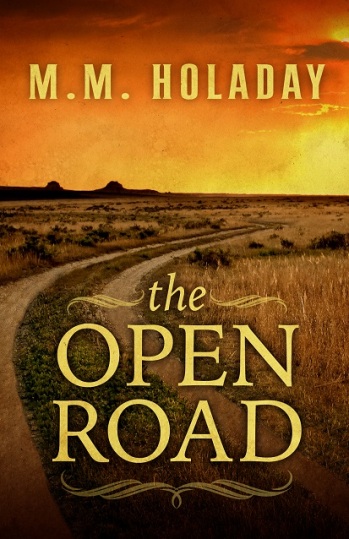 The Open Road is a historical novel set in the American West during a period of turbulent change in the late 19th century.

Bookheathen: Welcome to Bookheathen, Nan. The Open Road is published on April 19th. How do you feel now that it’s actually happening?

M.M. Holaday: The long wait from first learning in October 2015 that Five Star accepted my manuscript to the official launch date in April can be compared to having a baby! Initially nervous about becoming a mother, by the ninth month a woman generally has an attitude of ‘let’s just do this.’ Likewise, at first I was nervous and overwhelmed, but waiting these 18 months has given me plenty of time to process the idea. I feel ready.

BH: Writing a novel, editing and finding a publisher (and more editing!) is a lengthy process and involves a lot of hard work. Now that your work is actually out there, are you at all apprehensive about how it will be received?

MMH: I am absolutely apprehensive. Writing is hard work and it’s scary to put oneself out there. I have to keep telling myself that I did my best and there is no pleasing everyone, so growing a thick skin is probably all I can do at this point; plus learn from my mistakes.

BH: Tell us a bit about the story, the characters and the themes.

MMH: The premise of the story is that deeds done in the name of friendship are rewards in themselves, yet often are returned in abundance too.

The book begins with a young adventurer, Win, returning to his home town to visit his childhood friend’s parents, whose attentive care helped him through his tough childhood. They have been killed, but he reunites with their son, Jeb, whom he persuades to come west with him, to see the frontier while it is still unspoiled wilderness. Two themes thread their way through the novel: the first, friendship – played out in the loyalty between Win and Jeb, Meg and Gus, Meg and Gray Wolf – the second, the disappearing wilderness – what was gained, and lost, through progress.

BH: The Open Road is essentially a story about the wild west. What made you decide to write this kind of story?

MMH: The time and place allowed my characters liberty to roam in ways that are impossible now. I liked the idea of setting a couple of friends loose against the backdrop of a restless, turbulent time in history, hoping to tell a story about ordinary people living in (and making the best of) the times they were born into. Also, as I researched this time period, I became aware of fascinating, rarely told stories running beneath the surface stereotype; I was hooked.

BH: The Open Road is set during the latter half of the 19th century. Did the popularity of this period among western filmmakers in any way play a part in your choice of setting?

MMH: I grew up watching westerns but wasn’t a big fan; the men resorted to brawling too often and drew their guns too quickly. The romantic notion of unbridled freedom that we associate with the American West is appealing, however, and some filmmakers have captured it with stunning cinematography.

BH: In The Open Road, Jeb, Win and Meg form an atypical love triangle. Neither of the men seems to aggressively resent the other. What were your thoughts on that?

MMH: I did not want the relationship between Jeb, Win, and Meg to be conventional, where two men fight over a woman. I wanted to explore the complexity of alliance and loyalty, and wondered if it was possible for the characters to share a deep connection that didn’t destroy any of them, but rather, made each of them better.

BH: Are the characters complete invention or do you have real life models?

MMH: The characters are complete invention, not patterned after any one individual I know. The main characters are decent human beings, though, and I am surrounded by decent people in my life, so it follows that one might try to make a connection. There is none. It is no different than if readers I’ve never met saw qualities in the characters that reminded them of someone. I have to add, though, one reader did remark, ‘Every woman runs into a Carl Pitts at some point in her life!’

BH: What about Gray Wolf? Is he fiction or is he based on a historical character?

MMH: He is also fiction; but there were leaders from many tribes who tried to be peacemakers, who knew what they were up against, and who worked hard to protect their people.  I wanted to explore the idea (at least) of a cooperative relationship in the merging of cultures.

BH: In my review of The Open Road a few weeks ago, I said that your writing reveals your passion for the subject matter. Can you tell us when and how that passion was ignited?

MMH: Like everyone, I am a product of my time. I came of age in the 1970s, a time when many disenfranchised groups were speaking up. I was particularly struck by the occupation of Wounded Knee in 1973 by leaders of the American Indian Movement and the Oglala Lakota protesting government mismanagement and corruption. I lived in Minnesota, the state next door to the conflict, so it was covered extensively in our news. It left quite an impression. Also during that time, conservation movements stirred awareness of human impact on the natural world. Environmental causes altered my world view that has remained part of me to this day. It was, in part, motivation to restore a tall grass prairie on an old crop farm we bought years ago. Restoring the prairie piqued my interest in learning more about the American Great Plains and influenced my writing as well.

BH: You obviously have strong feelings about how the way of life of the native North Americans was systematically destroyed by the colonists, a process that started with the arrival of the Spanish in the late 16th century. Do you think this destruction could have been avoided, or is tragedy for one people an inevitable consequence of colonisation by another?

MMH: I think books have been written analyzing that question! I don’t have a good answer, except to say that I do wonder how events in the American West might have played out if our government had honored any of the treaties, if some key military figures had been given different posts, or if the general public had been more aware of the policies being implemented by their leaders.

BH: In my review, I also drew parallels with Larry McMurtry’s Pulitzer Prizewinner Lonesome Dove. It has the same spirit of adventure, and deals too with gritty women surviving in a man’s world. Were you aware of this book when you began writing The Open Road and if so, were you influenced in any way by it?

MMH: I read Lonesome Dove a few years ago, after I started writing my novel. While McMurtry’s strong characters cannot be duplicated, I’ll admit that Clara’s resiliency made a big impression on me. She was in the back of my mind when I fleshed out Georgia, in particular, and all of the women in my novel to a degree.

BH: In your earlier professional life you were a librarian, so books have been an important part of your life. At what point did you decide you wanted to write a novel, or has fiction writing always been an ambition?

MMH: I have always wanted to be a writer, but when I was young I felt like I didn’t have anything to say. I am more comfortable now taking on the challenge. As a librarian, I have seen how the right book in the right hands can make a difference; if someone discovers my book on the library shelf and enjoys it, I will feel really good!

BH: And one final question – What of the future? Are you writing, or planning to write, another novel?

MMH: I am currently working on two novels, both based on characters in The Open Road. The first is a prequel and tells the back story of Gus, Meg’s long-time friend. The other features Ginny, whom readers meet at the very end of The Open Road. Both require research into a slightly different time period and setting, which I enjoy, but to be honest, I cannot say what the future will be for either.

BH: Thank you very much, Nan, for agreeing to talk to me about your work. I look forward to reading your next novel.

MMH: This was my pleasure, Andrew.

You can find more information about M.M Holaday and her work HERE, and you can read my review of the novel HERE.