[Here is the final extract from my 2004 historical romance, The Tiger and the Cauldron. The others are here: Nadia’s Dream  The Parting   In The Stables . You can find the whole story as an e-book on Amazon Worldwide.] 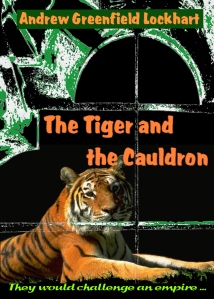 Hassan was unable to sleep and, though it was hardly necessary, offered to keep the second watch until the Dog Star sank below the southern horizon. It grew quite chill and he wrapped his horse blanket round his shoulders. He walked up and down briskly, occasionally slapping his arms to keep warm. Below, at the far edge of the rock, another sentry – Mujir, he thought – guarded the gateway.

He had become used to the sound of water surging through the channels in the rock and now scarcely noticed even the muted roar as it descended again riverwards. Time passed slowly. He amused himself by studying the myriad of individual twinkling lights and the band of tiny stars that spread across the heavens like a luminescent cloud. As he looked out westwards, it seemed to him that the Dog Star, blinding in its splendour, hovered over the Alburz peaks without getting any closer to them. Higher in the sky, another star caught his attention, shining almost as brightly but with no flickering – one of the five that were destined to wander for ever through the constellations, but belonged to none. Jupiter, Shirazi had called it, named after the god of the Romans.

Two figures detached themselves from the shadows of the lower terrace and climbed the steps towards him.

“Hassan.” It was Sayyid’s voice. “The Captain has commanded me to relieve you.”

“An hour, no more, Sayyid!” Doquz too wore a horse blanket round her shoulders. “Another should take your place. It’s too cold for extended watches when we have fifty able to undertake the duty. Come with me,” she said to Hassan. She led him down the steps and across the courtyard, stopping and bending down to rub her hands together by one of the dying fires. “You are in need of warmth.”

She unsheathed her scimitar and hooked it through the handle of a kettle that lay in the embers. Then, taking him by the arm, she drew him into the shelter of one of the rooms, which was empty save for a burning candle and yet another blanket that had been laid as a bed. There she set down the kettle. She took off her helmet and gave it to him. With the blanket edge protecting her hand she lifted the kettle again and poured its contents into the helmet.

Hassan raised the helmet to his lips. The aroma of warm wine mixed with spices drifted into his nostrils and he sipped the liquid gratefully. His chill abated.

“That was good,” he said, giving Doquz back the helmet.

“In the Zagros winter, it was a most welcome beverage,” said she.

She drank what remained of the wine, threw the helmet aside and sat down on the horse blanket. She undraped the one that covered her shoulders, loosened her corslet and extended both her arms towards him. The candle flickered.

Hassan knelt and took her hands in his. “Doquz …”

She pulled him down beside her. “I cannot pretend you were the first, Hassan,” she said. “Does that trouble you?”

“That, no,” he replied. “It troubles me only that I could not please you.”

“Then I was the first for you, as I thought. Truly you did not bed your Luciana?”

“Not my Luciana!” Hassan felt his cheeks burn, but if she had not guessed the whole truth he was not now going to confess it. “I could not love her as she wished.”

“Yet with me you were gentleness itself.”

“I do not tease, Hassan. You are young, but there is more to manhood than most men learn in a lifetime. With you …” She did not finish the sentence but reached up and kissed him full on the mouth.

Hassan allowed his lips to linger on hers before breaking free to pose the question that had haunted him since Maragha.

“Then I did not displease you?”

“How could you think that? My life had become so grim and, before that night, I had not thought to find such love again.” She paused to kiss him again, this time fiercely, her mouth open and her tongue seeking his. When it seemed to Hassan that neither could any longer draw breath, she released him. Her lips found the lobe of his ear. “No, indeed, it was more, Hassan,” she whispered. “The other was a childish fancy. I know that now. It excited and thrilled, but did not satisfy.”

Once more Hassan was gripped by a fever of excitement. He felt he ought to respond in some way but found he could not speak without stumbling over the words.

“The last few nights,” he began. “… when we camped in the hills … I would have come to you. I wanted to come to you … when you cried out in your sleep. Yet you sent me away …”

“It would not have been proper. You must know that.”

She bit the lobe of his ear, very gently, and encircled his neck with her arm – the left – and only then did Hassan notice she no longer wore the bandage.

“Then let us lie together now while we have the time, my Hassan,” said Doquz. She pulled him even closer, then down beside her on the blanket. The ground beneath his elbow was hard but he scarcely noticed. ‘Come to me again. In case there are soon to be no more tomorrows for us, I want to know your love one more time.”

The Tiger and the Cauldron