I was going through my folders the other day with a view to trashing really old files when I came across this poem. It’s just something I wrote on the eve of the new millennium 17 years ago. Of course, it’s rather out of date now but as I had a lot of fun writing it I decided that, instead of throwing it away (or deleting it accidentally), that I would share it with the world. I hope you have fun reading it!

(composed during the last hours of 1999)

Centuries ago, the Prophets of Gloom

Predicted an end of millennium doom.

For reasons which no one could understand,

A dreadful infection would blight the land,

And, though Earth has existed for billions of years,

The world that we knew would collapse round our ears.

And civilisation will come to an end.

Before Millennium bells have started to chime,

The sun will have to set for the very last time.

And, on the stroke of midnight, the lights will go out.” –

Apocalypse Now! –  without any doubt.

“Governments will fall, markets will crash

And every bank in the country will run out of cash;

Cars will break down;  trains will derail;

Phones will be dead;  computers will fail.

Hospital patients will be certain to die,

And planes will fall right out of the sky.

“Cows will be blighted;  milk will go sour;

Food in the freezer go bad on the hour;

And worse still, –  our beer will be changed into glue.

And the whole population will turn to drugs

Yet modern science had no explanation

Why this dread plague should infect every nation.

And holy men were puzzled too

By questions of a different hue.

Was surely just a Christian line?

The Chinese folk had naught to fear –

It was a month or two till their New Year.

Nor could Islamic peoples jump the gun –

Their year had three more months to run,

While Jews the world o’er, remember,

Would celebrate theirs in September.

Some clever nerds had placed a bet

That it had something to do with the Internet,

And that when we check our PC dates, 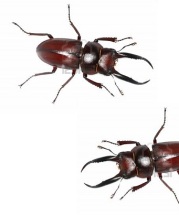 (Supplied by courtesy of Bill Gates)

We’ll find that somebody has blundered.

This Millennium Bug will go to town;

Communications will come crashing down,

And even billions from our taxes

Won’t save our hi-fis, fridges, faxes,

Until, at dawn on New Year’s morn,

An epoch of chaos will be born.

And, as noon drew close on the thirty-first,

The folks in Europe still feared the worst.

In Edinburgh, things were under way

For the celebration of Hogmanay,

Or to toast the city’s biggest wake

If only for Tradition’s sake!

While, in London, Dublin, Paris, Rome,

Most people opted to stay at home.

It was a majority decision,

To watch the End on television.

The BBC had gone Down-Under

To New Zealand.   And no wonder!

For the Prophets’ claims were quite specific, –

Armageddon would begin in the South Pacific.

As the clocks struck twelve in the Chatham Isles

The natives’ faces wreathed in smiles.

Through Sydney, Adelaide and Perth,

Midnight moved across the earth.

Couples married by the score.

‘Til at length, all England knew,

What had been suspected by a few,

That the gloomy forecasters had lied.

It was not at all what had been prophesied.

And the Welsh and Scots and other folks

Saw it was just an enormous hoax.

Then, as dawn broke over the Pacific reef

Governments breathed a sigh of relief.

Even the Euro lost scarcely a cent.

While all of America was sleeping in bed.

In NHS hospitals, it is such a bore, –

Waiting lists are as long as before.

PC’s and the Internet are working just fine.

Our beer is still beer;  our wine is still wine.

But ‘tis no miracle that we’re still alive, –

The Millennium was passed in ‘Ninety-five,

For all the experts now agree

That Christ was born in Five BC!

And, if you find these dates confusing,

Though life will go on for another year,

That bugs can strike in any season,

In any land, for any reason!

AND REMEMBER, THE THIRD MILLENNIUM WON’T HAVE BEGUN

TILL JANUARY FIRST, TWO THOUSAND AND ONE!

8 thoughts on “The Millennium Bug”