In Austen’s (probably) first full-length novel, the Dashwood family are happy in their home at Norland Park. However, the property is entailed to a son of Mr Dashwood’s first marriage and when he dies, Mrs Dashwood and their daughters, Elinor and Marianne are obliged to leave. Elinor is thus forced to part from Edward Ferrars, the man to whom she is attached. The three women along with the youngest sister, Margaret, take a cottage in Devonshire on the estate of Sir John Middleton, a convivial country ‘gentleman,’ who is a distant cousin. 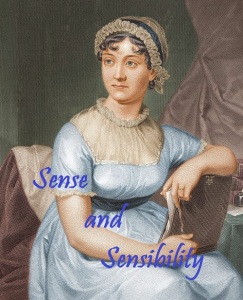 The move brings them into the society of Sir John, his family and their friends and acquaintances. Among those are Lady Middleton’s mother, Mrs Jennings, and the Steele sisters, Anne and Lucy. Marianne attracts the attention of Colonel Brandon. However, she only has eyes for Willoughby, an apparently respectable and honourable young man who befriends the Dashwood family but departs suddenly and mysteriously leaving Marianne in no doubt that they have ‘an understanding.’

Marianne’s unhappiness is compounded by the loose tongue of Mrs Jennings, a rather stupid, gossipy woman who, when she scents a piece of interesting local news, invents a story to go with it. In fact, the insensitivity of Mrs Jennings borders on the malicious.

Mrs Jennings invites Elinor and Marianne to accompany her to London for the season. Marianne, seeing an opportunity of meeting Willoughby again, persuades Elinor that they both go, much against Elinor’s better judgement. Elinor has meantime learned from Lucy Steele’s own lips that Lucy and Edward Ferrars are engaged and about to be married.

When Willoughby proves to be a despicable villain, Marianne is devastated. Elinor does her best to console her, aided by Colonel Brandon (who of course fancies Marianne though he is a rather more sympathetic character than most of their other acquaintances.) She also manages to hide her own feelings and disappointment that Edward has chosen someone else.

The arrival in London of the sisters’ half brother John Dashwood and his wife Fanny complicates matters. The engagement of Edward to Lucy becomes public knowledge and stirs a few breasts, including that of Edward’s mother, who disinherits him.

But this is a Jane Austin novel so, as one would expect, love conquers all. Misunderstandings are cleared up and the sisters both find happiness by the end.

We have no way of knowing for sure how much of Jane’s original writing  – [Sense and Sensibility was begun in around 1795 and not published until 1811] – forms part of the finished work we read today. However, even with later editing, it does not for me match the plot maturity of Pride and Prejudice, Emma or Northanger Abbey. I did enjoy the dialogue, especially the interplay between Elinor and Mrs Jennings, and between Elinor and Lucy. The careless and ill-considered remarks of Jennings, the provocative insinuations of Lucy and her low breeding contrast with the patience of the heroine who, with the good manners of her society, hides her distaste and annoyance – and disappointment – in ambiguous responses. Both examples demonstrate Austen’s talent for observation and her understanding of the sometime pettiness of the world she inhabited.

Sense and Sensibility may be  the most frivolous of Austen’s novels. But I think it may also be one in which she most intensely satirises the idle frivolity of her day. The middle classes are petty and shallow, and seem to have nothing better to do that attend balls and make up scandalous gossip. None of the characters are very likeable – with the possible exception of the Dashwood sisters whose qualities, it is supposed, inspired the eventual title. Willoughby’s eventual apologies do little to redeem his character and Brandon, though he is what we might describe nowadays as a nice guy, is not drawn firmly enough to make him a winner in the mould of Darcy or Edmund Bertram.

4 thoughts on “Elinor and Marianne”