Chains of Blood and Steel 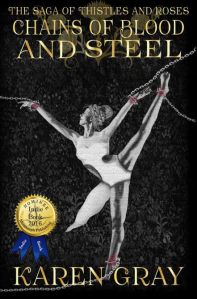 Chains of Blood and Steel is the second book in Karen Gray’s Saga of Thistle and Roses. Based loosely on the Anglo-Scottish feuding of the late Middle Ages, the stories are however set in a futuristic imaginary world of the 27th century. The world we know has been devastated by a nuclear war and a new civilisation built on low technology. However, medical science has advanced beyond anything possible today, and men and women are capable of reading minds. This ‘new’ Britain is also home to mythical beasts who act (witch- and wizard-like) as familiars to the human inhabitants.

‘Before Randall could react, Raymond’s blood was already flowing. Morag had leapt forward and battered Raymond’s face against the table, bloodying his nose and splitting his brow where his forehead met his metal cuffs.’

In Book One, Morag discovers she is heir to the throne of Alba. Book Two follows her journey as she continues her physical training and develops her mind-manipulating talents. However, this novel concentrates  more on the story of Ava – [introduced as a medic in the first book] and John – [Colonel Tesso in For King and Country].

‘John flicked the blood from his katana’s blade and replaced it in its scabbard … He looked down at the body at his feet, a girl of eighteen or so. John had no idea what she had done, and he would never ask.’

Ava, abused by her father the Spymaster and made to do his bidding, contemplates suicide but is rescued by John who falls in love with her. John has been groomed as a child as champion and assassin for the bastard king, Edward. Helped by Morag’s mental powers, he breaks free of the psychic chains that bind him and becomes his own man. When the extent of Ava’s abuse becomes clear, he vows vengeance. Yet there is a great deal more to Ava’s predicament than physical ill-treatment, and the plot takes us into horrendous scenes of blood-letting, torture and child molesting.

‘Usually she could tell when he was approaching, but her senses were dulled by pain and alcohol. “Yes, Daddy.” He narrowed his eyes at her, looking her up and down. His attention made Ava’s skin crawl and churned her stomach, reminding her of how queasy she already was.’

Meantime, Morag’s relationship with Brax develops to a sexual level. But is he totally free from the psychic power exerted over him by Edward? And for that matter is John?

Aimed at younger* readers (I suppose), Chains of Blood and Steel is nevertheless pretty adult in its depiction of sex and violence. Indeed, some chapters might well be prefaced with a TV-style warning. It has a Scottish feel about it, no doubt intentional, yet the reader should not be tempted too much to draw parallels with real history. Karen Gray writes a much cleverer story than that, full of twists and turns, mesmerising pace and a whirlwind of action.

I am not very good with series novels but, despite my reservations, I felt myself drawn to the characters. Chains of Blood and Steel, like For King and Country, is sheer Sword and Sorcery stuff; it’s the sort of excitement I used to enjoy in my teens. Its impetus is such that even an older* reader like me can easily suspend disbelief and begin sympathising with Morag, Brax, Ava and the others, and their predicaments.