‘Hag-seed, hence! Fetch us in fuel. And be quick, thou’rt best to answer other business.’ [Prospero to Caliban, The Tempest]

From the off, we suspect that Hag-Seed might be be Atwood at her most provocatively outrageous. However, post-prologue, the novel settles down to a semblance of normality.

Felix is sacked as artistic director of the Makeshiweg Theatre Festival. He makes some life changes and plans revenge on those who have ousted him. Apart from living in a hovel and having an imaginary daughter called Miranda, Felix seems to be a fairly normal guy. [I should point out here that – as we learn at the beginning of the book – Felix did have a daughter Miranda, but she died.]

‘She never asked him how they came to be there together, living in the shanty, apart from everyone else. He never told her. It would have been a shock to her, to learn that she did not exist.’

Nine years into his exile, Felix takes a job at a prison, teaching theatre, a chance to develop his own particular – and rather exotic, or eccentric, depending on one’s point of view – ideas about the presentation  of Shakespeare’s plays. This is Shakespeare as you’ve never seen it before, and what better stage than such an intense microcosm of Shakespeare’s Thespian world of witchcraft, revenge, lust and regicide than among a bunch of thieves , murderers, con-men and rapists?

‘His Caliban would be a scabby street person – black or maybe native – and a paraplegic as well, pushing himself around the stage on an oversized skateboard.’ 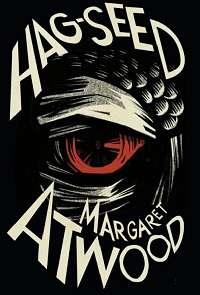 For three years, Felix’s endeavours appear successful and he begins his fourth with great expectations of not only producing a successful play but of acting out his revenge. The instigators of his downfall, Tony and Sal, now ministers in the government, are to visit the prison.

‘Is it really that helpful, Mr Duke, to expose these damaged men …. these vulnerable men to traumatic situations that can trigger anxiety and panic and flashbacks, or, worse, dangerous aggressive behaviour?’

The play chosen for the year is The Tempest. There are some problems with the casting. No-one wants to play the parts of Miranda (a girl!) or Ariel (a fairy!) Here, Felix uses his imagination and ingenuity. He engages Anne-Marie, a professional actress, for Miranda, and persuades his inmate actors that Ariel isn’t really a fairy but some kind of invisible alien.

So far, so good, you think, and not too outrageous. Think again! I mean, they all want to be Ariel, fifteen Caliban, and not one King Alonso. The men are encouraged to look up ‘swear-words’ from the play and to use them instead of the conventional four-letter variety. But what about Felix’s revenge?

Well, what he plans is not exactly legal and, as the story develops, we wonder if he can really pull it off. Full of hi-tech wizardry, Felix’s alternative play – his play within a play, if you like – is daring and depends on precise theatrical timing. After all, the governor’s party are watching, are they not?

One of a series of novelistic re-tellings++ of Shakespeare by contemporary authors, Hag-Seed is an Atwoodesque re-imagining of The Tempest itself. Making use of the well-known Shakespearean technique of ‘the play within a play’, it goes a stage further and gives us a play within a play within another play. Felix is Prospero, Anne-Marie is Miranda, but with which characters in the play shall we identify the other characters of the novel? It isn’t always too clear, but it’s fun trying.