In the Shadow of the Sword 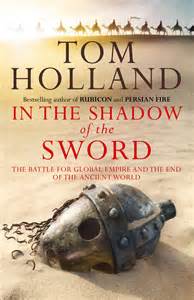 My recollection is that I read this book around three years ago. I had to skim through it again to refresh my memory.

In the Shadow of the Sword is a serious work of history, Tom Holland being one of the most knowledgeable and accomplished writers about the ancient world. He has also published books on the Persian Empire and the Roman Republic.

‘A narrative that features the persecution of veiled Christian women in Arabia by a Jewish king is clearly one set in a world at some remove from our own.’

The book is subtitled ‘The Battle for Global Empire and the End of the Ancient World’, which doesn’t quite give away the subject matter – a comprehensive study of the Abrahamic religions and in particular the rise of Islam, its development and its conquests.

Holland begins his massive task with a look at the world *** as it stood around 500CE.  Then Europe and Eurasia were dominated by two great but shrinking powers, Persia and Rome, with a frontier just to the east of present day Turkey and Syria. [Does any of this begin to sound familiar?] The people of the time usually belonged to one of three monotheistic faiths, Christianity, Judaism and Zoroastrianism, with much else in common. Into this arena came the Arabs, once polytheistic but now fired by the message of a ‘new’ faith and the teaching of a ‘new’ prophet named Mohammad.

‘Identity was coming to be defined not by the kingdoms of this world  but in various conceptions of the One, the only God: by monotheism.’

However, in In the Shadow of the Sword, Tom Holland doesn’t only chart the rise of the Arab power but also tries to explain it. What was so different about this conquest, this new empire, this new religion? He only partly succeeds in answering the question and in trying comes to an apparently obvious conclusion. Not much!

‘Caesars, Shahanshahs and Caliphs, none of them remain – but the words of the rabbis who taught in Sura, the bishops who met in Nicea and the ulama who studied in Kufa still shape the world as living things today.’

The book is not anti-religion and the author does not attack or belittle the faith of millions across the world today. Yet, whilst demonstrating the power and appeal of monotheism, this well-researched and beautifully written piece of ‘creative’ non-fiction seems to show only that what we ‘know’ about the origins of the Abrahamic faiths – their creed and much of their writing – is a human construct.

***Of course, this wasn’t the world at all but only European and West Asian perception of it.