The story of Sakuntala and King Dushyanta (variously Dushmanta or Duhshanta) is an ancient tale, its origins going back thousands of years to the myths of India. The first known written version appears in a Sanskrit epic poem, the Mahabharata, which dates from around the (Western) year 400. It has since been retold in many forms and many languages, prose, poetry, play, film, music and art.

Sakuntala is a simple tale, the prototype of countless (so it seems to me) novels in which the themes are love, loss and reunion. It has a bit of magic and a bit of sex, though not too much of either, and a fair amount of philosophic introspection. The versions considered here, the first a seven act play, the second a short story for children, preserve both the themes and the simplicity.

Sakuntala is a demi-mortal, daughter of the nymph Menaka and a powerful royal sage, abandoned by her mother shortly after birth. She grows up in a hermitage, a community of ascetics led by Kanva, who live at one with nature and the animals of the forest. Readers of James Hilton’s Lost Horizon will immediately think of Shangri-La.

‘I cannot tear my thoughts from Sakuntala. My body moves onward, but my unsteady mind runs back like the silk of a banner carried into the wind.’ (Kalidasa)

One day, into this paradise charges King Dushyanta with his army, huntsmen and elephants. When he recognises the hermitage as a place he is sworn to protect, he sends his followers away. Sakuntala is walking in a grove with her friends. Dushyanta sees her and immediately falls in love with her, and she with him. The sensuality is implicit in the language. It is muted, but it is there. In the space of a page or so, Sakuntala and Dushyanta undergo some form of ritual marriage, he gives her a ruby ring, she becomes pregnant and he leaves to return to the palace. 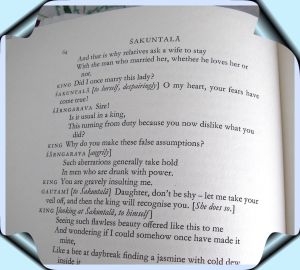 Sakuntala, caught up in her daydreams, inadvertently offends Durvasas, another powerful sage, who curses her. The man she loves will forget and repudiate her. Durvasas regrets his action but cannot wholly remove the curse. Instead he mitigates its effect with a charm put on the ring, that Dushyanta when he lays eyes on it will remember.

‘She merrily let her sari spread out over the water; the shimmering sari blended . . . . moulding itself to the waves. Because of Durbasa’s curse, the king’s ring slipped from the corner of Sakuntala’s sari of shining silk, and fell into the bottomless water . . . ‘ (Tagore)

When her husband does not come for her, Sakuntala sets out for the palace but unfortunately loses the ring in a river. The sage’s prediction comes to pass. Dushyanta does not recognise Sakuntala and sends her away. Menaka, observing the scene from above, has a sudden fit of remorse and spirits her daughter away to a mountain retreat where she gives birth to Bharata.

[The various versions deviate slightly at this point but the main facts are the same. The Mahabharata for one thing is more explicit in sexual terms.]

The gods take pity on the couple. The ring is recovered by a fisherman. Sakuntala and Dushyanta are reunited. The king recognises Bharata as his son and heir and, as in all good fairy tales, they all live happily ever after.

‘At the touch of his son, the king was overjoyed and, with proper sense of justice, he recalled his wife and gave her due honour.’ (the Mahabharata)

There is no high drama in Sakuntala, no gratuitous violence, no monsters, no unsolvable mystery. However, it is a splendid introduction to the literature of the Indian subcontinent. Its simple message was one to inspire, among others, Beethoven, Schubert and the  great Wolfgang Goethe himself, who wrote:

[Should I wish to grasp heaven and earth in a single name, I will name you Sakontala and all is said.]