‘If Dumas were alive today,’ writes Keith Wren in his introduction to my current edition of The Three Musketeers, ‘he would certainly not be bidding for the Nobel Prize for Literature but writing scripts for The Bill or Brookside.’

Dr Wren’s remark, written around 1993, may not strike many chords today since neither of the two soap operas mentioned still runs on British television. However, the point he makes is a valid one. Dumas, skilled exponent of the novel in serial form, knew what his public wanted and served it up to them in aces. His approach to storytelling (at least in this novel) was very much in accordance with the expectations of the modern soap opera fan.

Critics of Dumas’ works may deny that he was a great novelist but, whether that is true or not, he was undoubtedly a great storyteller. As with Walter Scott in this country, it is impossible to overestimate his contribution to the development of the historical novel – especially the historical romance.

The Three Musketeers is one of Alexandre Dumas’ (Dumas Père’s) best known, best loved and greatest stories. I would agree it’s not a great novel; there are too many inconsistencies and the plot is a bit wobbly. D’Artagnan is not Edmond Dantès. The author does not reveal and explore the depth of the human soul in the Musketeers as he does in Monte Cristo. D’Artagnan is more a younger version of Cervantes’ Don Quixote – indeed Dumas describes him in those terms:

‘Fancy to yourself Don Quixote at eighteen – Don Quixote peeled, without his coat of mail or greaves …’

The Musketeers are impossible adventurers, daring, romantic, swashbuckling if you like, and incredibly arrogant. Based on the exploits of four real-life characters amidst a cast of historical consequence, D’Artagnan, Athos, Porthos and Aramis drink, game, fight and love with little regard for tomorrow. 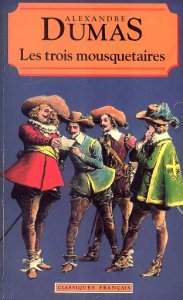 Arriving in Paris, a young man from Gascony (D’Artagnan) is caught up in the affairs of the French Queen Anne and the political machinations of the cunning Cardinal Richelieu and his beautiful but deadly spy, Milady de Winter.  He falls in love with Constance, young companion to the Queen, and assists her in protecting the Queen’s honour when Richelieu tries to expose her relationship with the Duke of Buckingham. However, Constance is kidnapped and D’Artagnan with the help of his friends sets out to recover her, a quest that brings him within the reach of Milady’s spiteful hatred.

‘Pale and terrible, her ladyship raised herself up, and pushing away D’Artagnan, who was near her, by a violent blow on the chest, sought to hasten from him… The young man now knew her secret – that terrible secret, of which the whole world was ignorant …’

The background to the story – the Huguenots, the strained relations between Louis XIII, his Spanish wife and his cardinal, the siege of La Rochelle, the murder of Buckingham and other historical episodes – is authentic, yet Dumas treats all in a cavalier way. The Three Musketeers is high melodrama but it is edge of the seat suspenseful fun. A great many swashes are buckled in its 500 or so pages. The dialogue is clever, and the book also has its share of tragedy.

This particular translation, by William Barrow, is an old one from 1846 – only two years after the story first appeared in novel form. It is suspect in certain passages, as Dr Wren more than hints in his introduction. Indeed Barrow is somewhat conservative and even prudish in sexual scenes, reflecting the attitudes of English Victorian society. Wren suggests the reader might care to refer to the original French, which I did (though my competence at that language is inadequate to reading the whole book in a reasonable  time span) and recommend that English speakers who can’t read French at all might care to try a more recent translation by Richard Pevear. Apparently – and I do not have time at present to read this translation too – he is much less coy about bedroom scenes.

None of the movies of The Three Musketeers does justice to the main characters: Athos is a flawed and pained aristocrat; the other three are all in their way womanisers, D’Artagnan the most blatant; the vain Porthos is a gigolo; Aramis, despite his clerical ambitions, a very unclerical admirer of feminine nobility.

Had television existed in 1844, I could well imagine French – or British – soap addicts sitting glued to their sets as the weekly adventures of the musketeers unfolded.

The Three Musketeers was one of my favourite books back in my early teens, when I first read it, and I enjoyed it every bit as much this time around.

“‘It is by my order, and for the good of the state, that the bearer of this has done what he has done.  RICHELIEU'”