I wrote a few months ago that I was planning to re-read some of Dennis Wheatley’s novels. The first three of my choices were reviewed at the time: 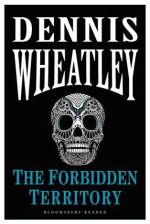 The Duke de Richleau has received a mysterious coded letter from eastern Europe which he decrypts with the help of his friend Simon Aron. Their American friend, Rex van Ryn, is in prison somewhere in Russia – probably Siberia – and the Duke and Simon embark on a rescue mission.

In the course of their adventure, Simon falls for Valeria Petrovna, a darling of the Russian stage while the Duke uses his contacts (not to mention his considerable wealth) to locate the prison where Rex is held. He learns that Rex has been searching for a long-lost cache of jewels belonging to Shulimov, a minor Russian prince who fled the Revolution, and has stumbled into a secret territory forbidden to tourists.

The three men resort to some desperate measures to break Rex out of prison and, having done so, they take refuge with Marie Lou, a Franco-Russian girl who turns out to be the daughter of Shulimov. Now wanted by the authorities for murder and theft, they flee for their lives from the snows of Siberia towards the border with Rumania, taking Marie Lou with them.

They don’t make it and the three men are caught, arrested and imprisoned. Marie Lou makes her way to Moscow to plead with Petrovna to intervene.

The problem with this kind of story is that to reveal too much in a review risks introducing spoilers. So I will add only that the resolution introduces the fourth member of the de Richleau coterie, Richard Eaton. Eaton, as readers of the black magic stories will know, marries Marie Lou – and you will have to read The Forbidden Territory to discover how that comes about.

The jewels? Well, again, you’ll have to read it for yourself.

Wheatley’s first novel is fast-paced and very readable. His depiction of Stalinist Russia and its version of the communist ideal is quite realistic and probably accurate. The characters do have a very narrow outlook on the world (so it seems to me) and though this book is not quite as ‘non-PC’ as some of Wheatley’s other novels, I do sometimes cringe at their language and assumptions. However, the 1920s and 1930s were, I suppose, the age of the gentleman adventurer in fiction – rich, bored and well-connected – so the reader needs to bear that in mind when judging.

Re-reading after about three decades, I still enjoyed it.