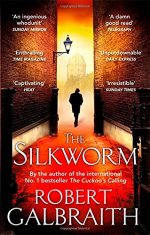 In her second novel in the persona of Galbraith, JK Rowling’s war hero detective Cormoran Strike takes on a case involving missing writer Owen Quine. Quine has written a novel entitled Bombyx Mori in which he seems to have maligned and slandered most of his colleagues in the book industry. In one particular section, the novel describes a particularly brutal and gruesome murder and when Quine turns up dead in the exact same circumstances, the ‘disappearance’ takes on a more sinister aspect.

[Incidentally, for the benefit of friends untrained in Latin, Bombyx Mori is the zoological term for the silkworm!]

‘The stench of decay grew stronger with every step Strike took. It reminded him of the time they stuck long sticks into the ground in Bosnia and pulled them out to sniff the ends, the one fail-safe way of finding the mass graves. ….He had expected death, but not this.’

Strike and his enthusiastic assistant Robin Ellacott set out to solve the murder and to catch a sadistic, twisted killer. Their efforts sometimes bring them into conflict with the law in the shape of Inspector Anstis, a former army buddy of Strike in Afghanistan, who suspects Quine’s wife of the crime. After interviews with a host of colourful characters and an eventful journey with Robin to Devon, Strike puts together a solution that seems so incredible that even he can’t believe it. However, with the help of Robin’s investigative skills and a few close friends, he eventually unearths the proof he needs to catch the murderer.

As I wrote a few months ago in my review of the first Galbraith novel The Cuckoo’s Calling [https://bookheathen.wordpress.com/2015/03/01/the-cuckoos-calling/ ], after disappointment with Rowling’s The Casual Vacancy [https://bookheathen.wordpress.com/2014/08/25/its-not-harry-potter/ ], I was looking forward to read about Cormoran Strike again. I wasn’t disappointed. Peopled with exotic characters from the literary world – authors, agents, publishers, The Silkworm is set mainly in London, the cold, snow-bound London of 2010’s Big Freeze. Both are subjects one presumes Galbraith/Rowling knows well, and her descriptive scene-setting as well as the manners and speech of the literati and pseudo-literati seem to confim the presumption.

The novel has a few subplots too. In addition to the developing professional relationship between Strike and Robin, we get a further glimpse of the romantic one between the latter and her disapproving fiancé. We see Strike in his family circle and get an insight into his dealings with his half siblings. No longer the rather sorry figure of the early chapters of the previous book, he is a man with a first rate analytical mind and one who can call in favours at the most unexpected moments.

I have the feeling that JK Rowling in her incarnation as Robert Galbraith has found a new world of wizardry and another outlet for her talents. I hope she writes more Strike novels.