Philip K Dick’s Hugo Award-winning science fiction novel is a novel without a hero or villain.

Instead, the various characters mill around somewhat aimlessly, doing meaningless jobs (or none at all), consulting the I Ching and reading yet another novel called The Grasshopper Lies Heavy. Several are not what they seem or claim to be. 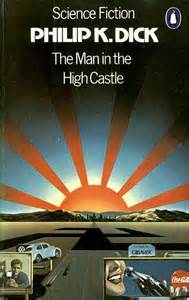 The Man in the High Castle is set in an alternate reality where Japan and Germany have won World War II and have carved up North America – and most of the rest of the world – between them. “Our” USA is divided into three states, Pacific Seaboard America, ruled from Tokyo, the East Coast, ruled from Berlin, and a sort of no-man’s land, the Rocky Mountain States, sitting inconveniently between. The Nazis have carried their racial policies to new extremes of barbarity. In Europe, Jews have gone (more or less) and other non-Aryans are on the way to slavery or extinction. Africa has been ethnically cleansed.

” … it had taken two hundred years to dispose of the American aborigines, and Germany had almost done it in Africa in fifteen …”

Japanese rule is relatively benign, but even in San Francisco, where the story begins, black people are slaves and Jews are in danger of arrest prior to being handed over to the Reich. Mr R Childan owns a store selling Americana and is on the lookout for a piece to please his Japanese contact, Mr Tagomi. Tagomi, part of a trade mission, is expecting a client from Europe, a Mr Baynes, who is coming to America to do a deal in injection mould plastics. Frank Frink is an American Jew who has just lost his job and is persuaded to go into business with a former colleague, making and selling original jewellery.

Frink’s estranged wife, Juliana, lives in Colorada and is a judo instructor. She picks up Italian truck driver Joe at a hamburger joint and together they embark on a trip to find Hawthorne Abendsen, author of The Grasshopper and eponymous man in the high castle. To complicate matters, this novel within a novel – banned in the East – posits a world very like ours, but with unpleasant variations.

How all these characters react and interact is the basis of Philip Dick’s intriguing tale. Although the plot seems aimless, The Man in the High Castle has much to commend it. Dick’s characterisation is brilliant. His style when handling Mr Tagomi, and to a lesser extent Childan, shows a real understanding of Japanese society and literature. He knows the importance of “face”, or “place” as he calls it here, and he has perfected the art of introspection through monologue. Indeed, he gets inside the head of all his characters and shows them to be real people caught up in a nightmare scenario much worse than that of Orwell’s 1984, published thirteen years earlier.

But The Man in the High Castle is not a nice novel. Had it been written today, it might never be published. It is black satire, for Dick’s audience of the nineteen sixties a horrific insight into what might have been. For the reader of 2014, the book’s language and wholly revolting fictions are horrors of a different kind. Although we might cringe at times from them, we know that, with the wrong catalysts, there are no depravities of which we human beings are incapable. The novel has violence, both expressed and implied, both institutional and personal, but the author neither justifies nor condemns. The universe is governed by yin and yang, where everything is connected, consequences are inevitable and resistence is futile.

At the end, we are left with questions: which is the real world, that of Tagomi and Baynes or that of Abendsen? is reality itself disruptive, as Abendsen suggests to his wife? have Dick’s characters grown, or are they in fact unchanged by their experiences?

“Could this, Mr Tagomi wondered, be the answer? ….. Or is this the Inner Truth now, this that is happening to me? I will wait. I will see. Which it is. Perhaps it is both.”

The Man in the High Castle is one of the few science fiction works that has risen above its genre and has become literary. Even if not nice, it is very readable.

2 thoughts on “The Man in the High Castle”